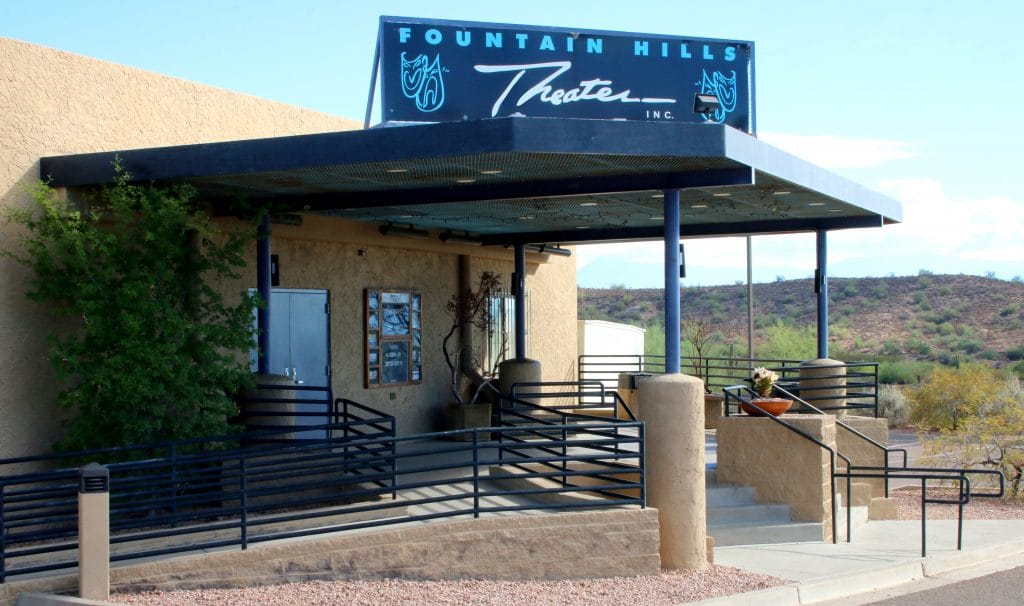 Fountain Hills Theater presents 3 regularly scheduled seasons of productions in their two theaters. The Theater’s year-round offering includes Mainstage, Mainstage Too!, and Youth productions. Additionally, special events, community outreach, and educational arts programming for our youth is also offered. Both stages often run productions concurrently. Special events are offered throughout the season on both stages as well as in community centers. The Theater has been in operation as a professionally-directed community theater for over 30 years and is 100% funded by ticket sales and donations.

The History of Fountain Hills Theater

For over 35 years, Fountain Hills Theater has been dedicated to providing quality theatrical and educational experiences while encouraging overall cultural development. The large volunteer organization, begun by Sandi McGee in 1986, has grown steadily ever since, largely due through 2017 to the direction of the Executive Director, Val Stasik. The theater began by staging two plays a year in a local elementary school gymnasium. Fountain Hills Community Theater was incorporated in September 1987 and granted a 501(c)(3) not-for-profit status in April 1989.  While housed in the Elementary School, FHCT regularly produced 3 – 5 shows per season featuring both classic and contemporary musicals and plays, including the Arizona Premiers of City of Angels and Tintypes.  In 1995, FHCT moved into a building that once housed the Town’s first library. Built in the 1970’s, the one-story structure and tiny stage presented unique challenges, but FHCT met those challenges head-on presenting even large, daunting musicals like Fiddler on the Roof and Shenandoah, earning the theater the moniker ‘The Little Theater That Could’.  Just a few short years later, in 2002, the theater was given the Town Community Center adjacent to the former library, and Mainstage was born.  Now with two full-time operating theater spaces, programming was increased to 10 shows per season, plus additional workshops and camps. The new Mainstage required considerable upgrading and construction, 90% of which was covered by a generous grant from the Virginia Piper Charitable Trust. Upon completion of the renovation, the original stage became what is now the current Youth Theater.  In 2008, a second series of plays and musicals was introduced.  Mainstage Too opened, sharing the space with The Youth Theater, presenting an additional five productions annually.

In addition to popular musicals and plays geared towards all ages, FHT’s Youth Theater regularly produces fun, exciting, high-quality shows, often with a social or moral value specifically for young actors. Our annual YABOY (Young Actors Benefiting Other Youth) program has confronted issues of teen runaways, the challenges faced by blind youth, teen depression and suicide, and issues facing the handicapped. The young actors experience a feeling of true community service and social obligation by visiting and working with experts in the field pertaining to each production, and sharing their talents with school groups at special performances. A portion of ticket sales is donated to a partnering organization involved with the issue at hand. Thus far, we have worked with and shared revenues with Home Based Youth Services, The Center for the Blind, Teen Lifeline, EMPACT Suicide Prevention Center and ARC, among others. In addition to producing live theater, FHT is a forum for education, expression and team-building for our youth. After-school workshops in voice, dance and acting are offered throughout the year. Summer camps for teens and pre-teens are regularly full to capacity. On a community level, the theater continues its history of involvement with the Town of Fountain Hills. We have provided costumes, props, technical support, set pieces, presentations and entertainment to the schools, the Chamber of Commerce, The Historical Society, the Scouts and numerous civic organizations such as the Kiwanis Clubs, Women’s Clubs, and Rotary Clubs. FHT organizes special daytime performances for the Charter School, Fountain Hills School District, Home-Schooled Students and the Boys and Girls Club. We regularly offer discounted and free tickets to seniors.

Fountain Hills Theater remains committed to choosing and producing high-quality plays and musicals based on a mix of popular appeal, artistic merit and manageable logistics.

The theater’s dedication to quality has earned many awards over the years, including recognition as Arizona’s finest non-equity theater. Over the years, FHT has garnered literally hundreds of statewide ariZoni nominations and numerous additional awards.

Now, with a full-time staff and 15 -18 productions each season, Fountain Hills Community Theater removed the word Community from its title and is today The Fountain Hills Theater…but is still ‘The Little Theater That Could’.