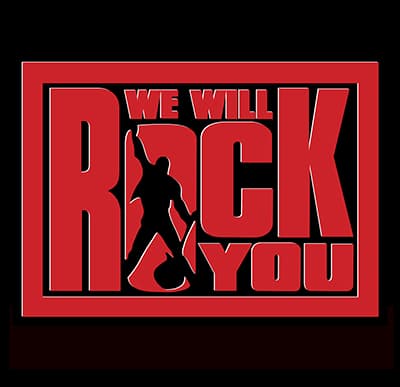 WE WILL ROCK YOU

Resistance is growing. Underneath the gleaming cities, down in the lower depths live the Bohemians. Rebels who believe that there was once a Golden?Age when the kids formed their own bands and wrote their own songs. They call that time, The Rhapsody. Open your eyes, look up to the skies and see.?Legend persists that somewhere on iPlanet instruments still exist. Somewhere, the mighty axe of a great and hairy guitar god lies buried deep in rock.?The Bohemians need a hero to find this axe and draw it from stone. Is the one who calls himself Galileo that man? He?s just a poor boy. From a poor?family.

Since 2002 over 15 million theatergoers in 17 countries have been thrilled by this awe-inspiring production which is based on the songs of Queen with a?book by Ben Elton (The Young Ones, Blackadder, Popcorn). Elton fashioned this hilarious futurist comedy around more than 24 of Queen?s biggest hit?songs including ?We Are The Champions,? ?Radio Ga Ga,? ?I Want To Break Free,? ?Somebody To Love,? ?Killer Queen,? ?Don?t Stop Me Now,? ?Under?Pressure,? ?Bohemian Rhapsody,? ?Another One Bites The Dust? and of course, ?We Will Rock You.?

?We Will Rock You? is presented through special arrangement with and all authorized performance materials are supplied by Theatrical Rights Worldwide, 1180 Avenue of the Americas, Suite 640, New York, NY 10036. (866) 378-9758. www.theatericalrights.com.