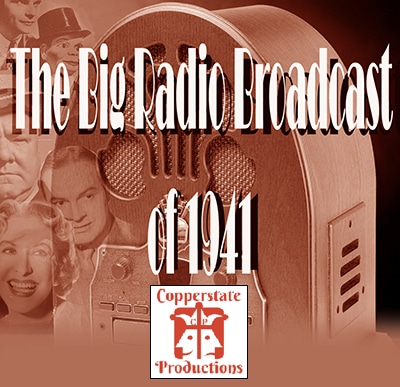 Directed and Written by Peter J. Hill
Music and Lyrics by Gus Schneider and Eddie Avril
Produced by Copperstate Productions

Touching, nostalgic and fun. A small, independent Midwest radio station is set to finally ?go national? with their?broadcast! Everything, including their financial future, depends entirely on going live with the national radio programming. A sudden freak snowstorm knocks out any chance of receiving the national feed. But wait?the employees realize that while they can?t receive news, they can still broadcast it! Can just four dedicated employees recreate an entire evening?s national radio broadcast? Can they save the station? Can they do it without falling in love? Well, if not, it won?t be for lack of trying!

?The Big Radio Broadcast of 1941? is created by Peter J. Hill and presented by Copperstate Productions.