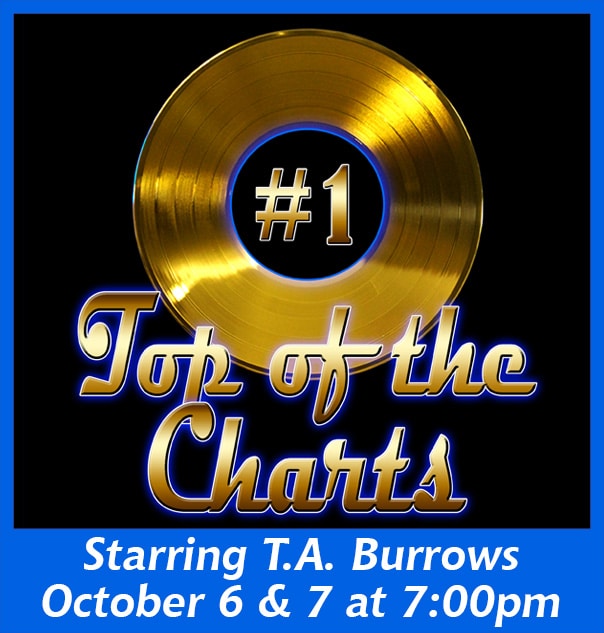 Memorable hits, legendary singers, and lots of laughs!??Top of the Charts? is more than just a rock ?n? roll show. It?s a fabulous, fun-filled ?blast from the past,? that is sure to be a ?number one? hit with audiences everywhere! Reminiscent of Casey Kasem?s American Top 40, ?Top of the Charts? is presented as a live ?radio show? with T.A. Burrows as host ?Great Dane Lane,? who not only counts down 20 of Billboard?s biggest #1 rock ?n? roll hits, but also uses his versatile vocal talents to perform each of these memorable songs in the style of the original artists.

A New York City native, T.A. Burrows is a multi-talented, award-winning, professional entertainer who has over 40 years of experience in the industry and has performed over 2,500 shows throughout the U.S. and Europe. He has appeared in Las Vegas, and he has opened for such stars as Patti Labelle, The Temptations, Earth, Wind & Fire, Chicago, The Pointer Sisters, and the late Bob Hope.

He is a master impressionist and singer who is capable of imitating everyone from Jimmy Stewart to Jimmy Carter; Michael Jackson to Michael Bubl?. T.A. is also an actor, who has been active in Valley theater for over 15 years. He is a four-time ariZoni Award winner, and a 10-time nominee. His theater credits include such musicals as Damn Yankees, Guys & Dolls, Annie Get Your Gun, The Pajama Game, Purlie, Give My Regards to Broadway, Sweet & Hot ? The Songs of Harold Arlen, and Simply Sammy, a tribute to Sammy Davis, Jr.