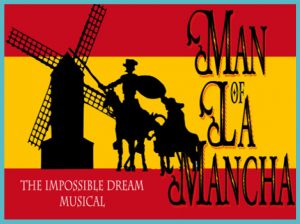 Inspired by Miguel de Cervantes’ seventeenth-century masterpiece Don Quixote, Man of La Mancha is one of the most successful musicals in Broadway history. Powerful, brutal, hilarious, and heartbreaking, Man of La Mancha celebrates the perseverance of a dying old man who refuses to relinquish his ideals or his passion. The celebrated score includes “The Impossible Dream,” “I, Don Quixote,” “Dulcinea,” “I Really Like Him,” “Little Bird,” and “To Each His Dulcinea.”

Auditioners should prepare:
– 16-32 bars of a song that best shows off their voice and range. An accompanist is provided. No recorded accompaniment, please. Please dress to dance.

Note:  The role of Don Quixote/Cervantes has been cast.

ALDONZA | Female 20s–mid 30s. Strong mezzo soprano with belt. Raw, gutsy, edgy. She is a kitchen wench/prostitute who Quixote tries to make into a lady. Guarded, defiant, a survivor. Beneath her tough exterior is a woman with a noble, gentle heart who has given up hope.

SANCHO PANZA | Male 30s–50s. Strong character bari-tenor. Devoted and loyal, he has been Cervantes / Quixote’s manservant and caretaker for many years. Sancho is funny, curious, greedy, loving and vacillates between feelings of compassion and skepticism for his master. While he often acts out of cowardliness and ignorance, he possesses his own folky wisdom.

CARRASCO / THE DUKE | Male 20s–50s. Baritone. As the character of the Duke he is the sidekick to the Governor; however, as Dr. Carrasco, he is Antonia’s fiancé, a man of science and reason. He thinks Don Quixote is a madman and insists that he return home for treatment. Arrogant, analytical, and refined.

PADRE | Male 30s-60s. Lyric tenor. A kind, thoughtful, sympathetic but passive Catholic priest. He is well-intentioned, but not strong enough to stand fully behind his beliefs.

THE INNKEEPER / GOVERNOR | Male 30s-50’s. A large and powerful man. He is kind as the Innkeeper, a gentle giant, but as the Governor he is the leader of the inmate society in the prison.

MARIA, INNKEEPER’S WIFE | Female 40s-60s. Alto character voice. The exasperated wife of the Innkeeper. She sees, and expects, the worst of all who enter the inn.

HOUSEKEEPER | Female 40s-60s. Soprano/mezzo. Quixote’s self-righteous, fastidious housekeeper. She cares for Quixote deeply, and has fantasies of a romantic relationship with him.

THE BARBER | Male, 30-40s. Funny. He travels the countryside and peddles shaves. He is known by everyone. Character baritone

MULETEERS | 4-6 men, 25-30s. Strong, masculine highwaymen. Men of size and stature. They are murderers, rapist and thieves who await their death in prison. One (Anselmo) should be a proficient guitar player..

Fountain Hills Theater is a 501(c)(3) organization. All gifts are tax deductible. The Theater is 100% funded by ticket sales and donations. Ticket sales alone do not cover operating expenses. For more information about donating or volunteering, please call 480.837.9661 x3 or read here.

MAN OF LA MANCHA is presented by arrangement with TAMS-WITMARK www.tamswitmark.com.

Fountain Hills Theater
OUR MISSION
Engage, inspire, entertain and challenge diverse audiences with innovative productions that range from the classics to new works; train and support our youth as the next generation of artists; and celebrate the essential power of the performing arts.
Popular News
Sign up for our Newsletter
Follow Us on Instagram
© 2020 Fountain Hills Theater. All Rights Reserved.