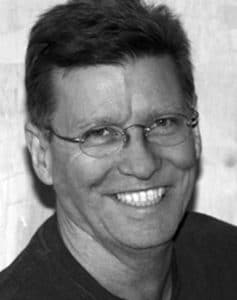 Peter J. Hill is the Artistic/Technical Director of Fountain Hills Theater, where under his guidance, the theater has grown from a three-show season to a fully staffed theater with two theater facilities. FHT now boasts a six-show Mainstage season, 5 annual children’s theater productions, a successful Mainstage Too! season, year-round workshops and seminars, and a budget that now exceeds $600,000 per year.

Peter is an accomplished playwright and has had the honor of having several of his plays optioned and produced including Ashes to Ashes, The Big Radio Broadcast of 1941, The Three Musketeers, Moby Dick, The Man Who Would Be King, Midsummer Dreamin?, and A Christmas Carol, The Musical all of which have been nominated as Best Original Script by the ariZoni Awards.

Originally from New York, Peter was for 10 years the Artistic Director of The Ala Carte Players and was responsible for all production aspects for a 110 seat dinner theater offering a season of 6-8 musical comedies. He was also artistic head of the Ala Carte industrial show department presenting 40-60 custom-created shows per year for such clients as Coca-Cola, Bristol-Myers, Ford Motor Corp, and I.B.M.

Peter was the producing director of Phoenix Theater. He helmed the theater for one year while a search for a permanent director was conducted. Ultimately responsible for the $2,000,000 plus annual budget, Peter is proud that during his stewardship the theater’s decade-old deficit of nearly $400,000 was reduced to $67,000 while simultaneously garnering a then unprecedented 35 ariZoni Award nominations for Excellence in theater.

The very popular Jukebox series of shows were also created by Peter J. Hill. This series is highly unique, in which the audience picks the musical numbers from a giant Jukebox. As a result, no two shows are ever the same. It all began with Broadway Jukebox, then followed by Christmas Jukebox, Hollywood Jukebox, Country Jukebox and The Nifty Fifties Jukebox.

He has also created several children?s musicals including Shrew, the Musical, Slumber Party 64, Miss Demeanor,  Buddy, Can You Spare a Dime? and, Back in the Saddle.

He has directed over 300 plays, musicals, commercials and industrial films, including the Southwest premiers of A Chorus Line, 42nd Street, ?night, Mother, Run For Your Wife and Lend Me a Tenor. As an actor, Peter has played roles ranging from Henry Higgins in the musical My Fair Lady to Antonio Salerie in Amadeus. ?He is proud to have shared the stage with Noel Harrison, Theodore Bikel, Buddy Ebsen and Bill Daily among others. Peter has personally won dozens of ariZoni Awards for Theatrical Excellence as well as several other awards for his work as director, designer and actor. He was a nominee for the Arizona Governor’s Arts Award. In 2009 he was awarded The Outstanding Contribution Award from the ariZoni Awards for his lifetime of dedication to Valley theater and was inducted in 2016 into the Verde Valley Hall of Fame..
Peter is married to renowned valley choreographer/director/actress Noel Irick.
Peter lives by the motto I can’t, I have rehearsal.