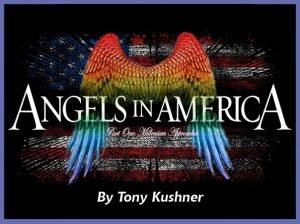 A Play in the Mainstage Theater

Winner of the Pulitzer Prize for Drama in 1993, Angels in America Part One: Millennium Approaches shows us America in the mid-1980s. In the midst of the AIDS crisis and a conservative Reagan administration, New Yorkers grapple with life and death, love and sex, heaven and hell. ​Angels in America: Millennium Approaches is an epic drama that has deservedly earned awards for its portrayal of contemporary America–its mixture of brutal reality and miraculous fantasy, its tragedy and comedy, cruelties and compassions.

To Audition:
Auditioners are asked to prepare a short monologue and be prepared to read cold from the script.

Auditioners should:
– Complete digital audition form (at this link, or through above button)
– Bring headshot, and resume if available and if not already submitted via link above

Video Auditions:
Must be submitted prior to January 14, and may substitute for appearing at the Saturday and Sunday auditions. Auditioners must be available to attend in-person callbacks January 17 if required. Video should include a short monologue and be uploaded with a headshot, and a resume (if available) when filling out the digital audition form linked above.

FHT prefers and encourages auditioners to be vaccinated.

Characters’ ages are not set in stone. All roles are open to all ethnicities. Actors should consider roles if they feel they can represent the age ranges listed.

PRIOR WALTER (male, age 20-35) Louis’s boyfriend. Occasionally works as a club designer or caterer, otherwise lives very modestly but with great style off a small trust fund. Fairly certain he is not a prophet. Also plays Man in Park.

THE ANGEL (female, age 20-40) four divine emanations; Fluor, Phosphor, Lumen and Candle, manifest in One: The Continental Principality of America.  Magnificent and sure. Also plays The Voice, Nurse Emily, Sister Ella and Woman in Bronx.

Millennium Approaches was first performed in a workshop production presented by Center Theatre Group/Mark Taper Forum, May 1990
The world premier was presented by The Eureka Theatre Company, May 1991
Opened in London at the Royal National Theatre of Great Britain, January 1992
Opened in New York at the Walter Kerr Theatre in April 1992
The first production of Angels in America, Parts One and Two was presented at the Mark Taper Forum